The origins of the quetzal date back to the age of the Mayas, who used as currency the feathers of the quetzal (a species of bird), salt, obsidian, precious stones, jade and in specially cocoa. The Spanish colonization established a monetary system in order to discard the practice of barter, and a new structure was established based on the Spanish currency.

The lack of readily available currency led to the minting of coins in different American countries, and particularly in Guatemala the Spanish coins –both imported or produced at the mints of the American continent, mainly in Mexico, Bolivia and Peru- continued circulating until the first quarter of the 19th century.

In the last thirty years of the 19th centurythe introduction of the decimal system coexisted with the use of another monetary structure based on the binary system. At this time paper money was issued by the banks of the old system and towards the end of the century the one-peso coin ceased to be minted, maintaining only those of lower denominations.

Towards the end of that century a curious kind of money appeared, known as “cédulas”, tiny banknotes issued by municipalities and commercial establishments for the payment of debts. The issuing of private currencies called “fichas” was also regulated, which were formerly minted for their use in farms, hotels or commercial companies.

In November 1924 and February 1925 the “Monetary and Exchange Act” and the “Credit Institutions Act” were adopted, and two alternatives were considered to issue golden coin or currency convertible to gold:one was asking for an external loan and the other was to gather national resources. The latter option was adopted. The Monetary Act adopted the golden standard and created a new monetary unit, the Quetzal, pegged to the US dollar. The creation of the new national monetary sign gave way to the foundation of the Bank of Guatemala, the only institution authorized to issue currency.

Based on the US dollar’s exchange rate in the previous year, it was decided that a Quetzal would equal 60 pesos and the issuing of money was exclusively reserved to the State. Under this new regime, silver and copper coins functioned as fractional currency (larger denominations were only issued in paper money). In 1925, silver coins were minted for 1 Quetzal, ½ Quetzal, ¼ Quetzal, ten cents and five cents, as well as one cent coins in copper alloy. In 1926 also 20, 10 and 5 quetzal coins were minted in gold. In 1932 two new denominations were introduced for ½ cent and 2 cents in copper and zinc alloy.

The Second Reform of the monetary and banking system of the Republic was the result of the October revolution of 1944, of the ensuing democratization and the economic thought of that age. Its purpose then was to provide the country with institutions to ensure the internal economic stability and to ease the progressive and ordered development of production. To this effect, the Congress of the Republic issued in the last months of 1945 the Decree n. 203 Monetary Act and the Decree n. 215 Bank of Guatemala Act, which provided the legal foundation for the development of a modern system of Central Banking.

Before the establishment and the beginning of the activities of the new bank, the Government of the Republic and the Central Bank of Guatemala signed an agreement “ad referendum” on 15 June 1946 in virtue of which the Government would cease to have rights over the issuing on banknotes and the minting of coins. Henceforward the right of issuing would be exerted by the State through the Bank of Guatemala, which would also have to assume the liabilities of the banknotes in circulation and the deposits established at the Bank of Guatemala.

The last modification of the characteristics of the monetary species was established by the Decree n. 92-98 of the Congress of the Republic of Guatemala, on 26 November 1998, which reformed the design on the back of the coin of one quetzal. The Agreement on a Firm and Lasting Peace, signed on 29 December 1996 by the Government of the Republic and the Guatemalan National Revolutionary Unit, was the historic event portrayed as the main motif of a legal tender coin. 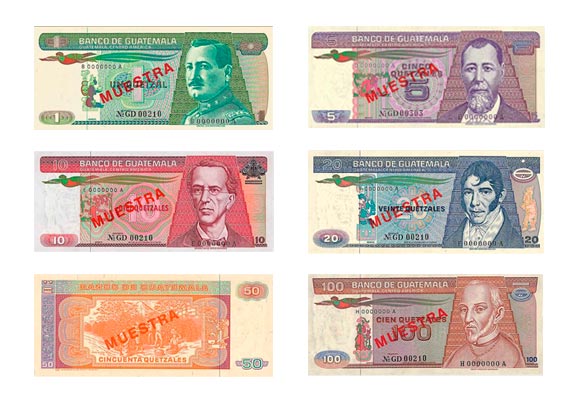 For more information on the characteristics of coins and banknotes check the web page of the Bank of Guatemala.

Why change currency with us rather than your bank